A New University Financial Model: The Final Step from Concept to Reality

This year is the final stage of planning for the new financial model, and the University has constructed the academic division budget for FY14-15 with an eye to translating it into the new model’s terms in the earliest days of coming fiscal year.

The new model’s planning period has been long enough that the term “new” seems oddly inappropriate when applied to something we’ve been discussing for years now. So, you are likely to hear references in coming days to the “University Financial Model,” or UFM. That will be a good signal to us all that the concept is fast becoming real.

So where does this notion of a University financial model fit in the broader context of things we’re trying to do at the University these days? Is it connected to Organizational Excellence? What is its relationship to the Managerial Reporting initiative? Let me start my personal answer to those questions with a picture: 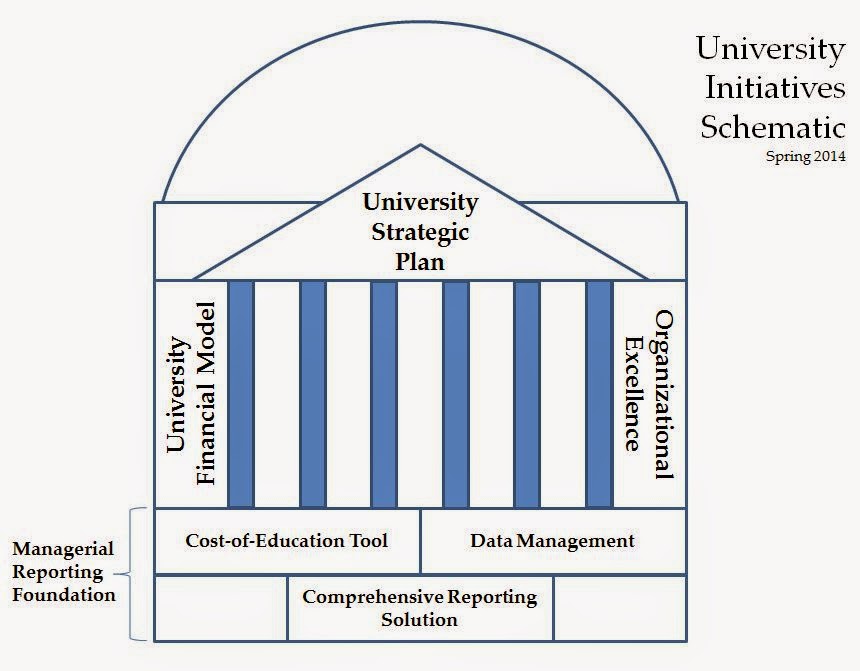 First, the University has established an ambitious Strategic Plan that sets a path to the future by specifically identifying areas on which the institution will focus its attention. It tells us where and what, but the plan wasn’t specifically designed to tell us how. The answer to how will come in many forms.  Those forms include new ways to maximize the effects of our financial resources (University Financial Model) and new ways to drive excellence in how we approach our work (Organizational Excellence).  Also, more effective navigation of the sea of data in which we are all immersed every day (Managerial Reporting) will provide the improved analysis and decision-making that we need to make progress in reaching the ambitious goal of this remarkable and challenging place.  All of these efforts are interconnected. For example, the first use of a new Cost-of-Education tool that is part of the Managerial Reporting initiative will be to develop scenarios that illustrate the University financial model.

Back to that University financial model: it enables leaders to more directly shape the financial destinies of the schools and units they lead while at the same time holding those leaders more clearly accountable for their performance. In the past, central leaders aggregated some of the revenues that those schools and units generated and allocated them in ways that weren’t always transparent to observers, while in the new model more revenue flows directly to the schools and units that earn it. At the same time, costs for central services that University leaders previously funded “off the top” of those aggregated revenues will now be allocated to schools and units by estimates of their usage of those services, based on such drivers as numbers of faculty, staff and/or students. Often for the first time, schools and units will see their entire financial picture and will be able to plan with a clear understanding of the financial implications of their plans.

The entire system is designed to reward academic-values-driven creativity while providing the transparency of financial planning and decision-making needed for everyone at the University to help ensure that we gain the maximum value from the financial resources we have. This model, as I’m fond of saying, enables the development of a cost-knowledgeable culture here at U.Va. I’m also fond of reminding folks that cost-knowledgeable doesn’t mean cost-driven. We should (and must) make decisions based on academic values. That’s why we’re here, after all.

Although the academic division budget currently being developed anticipates translation into the new model, it is the last that will have been assembled mainly using the University’s traditional processes and terms of reference. Schools and units will enter the coming fiscal year with the familiarity of a budget built the “old” way, but will participate in its conversion into the new framework. Few of our academic schools are able to directly generate more funding in a year than they spend, nor do University leaders expect them to do so. Because the institution has additional resources beyond those that the schools and units can provide themselves, such as unrestricted state funding and unrestricted private funding, the University will provide additional operating support. In the first year, that support will take the form of so-called hold-harmless funds, while in later years it will evolve into a combination of base operating support (ongoing) and strategic operating support (limited in duration).

As the academic division budget is translated into the terms of the new University financial model early in FY14-15, planning that is conducted exclusively in the new model’s terms will begin for FY15-16 and beyond. By October, the early steps of the budget-construction cycle for the next fiscal year, using those terms, will be well under way, and the transition to the new model will be complete by the spring when the FY15-16 budget is approved by the Board of Visitors. And the second year that our colleagues in the budget office coordinate the development of a budget in those terms, I’ll proclaim that, actually, Mr. Jefferson invented it. Which he probably did.