Happy last day of the fiscal year!  I just wanted to send a quick mid-summer message to recognize all the work that everyone has been putting into year-end. Our grant and contract numbers are looking good, the auditors are on site, and the budget will load tomorrow. We have had a great week (see the next post) and are really gaining momentum as we are improving how we all do work at UVA. I’m looking forward to a great Fiscal Year 2017! 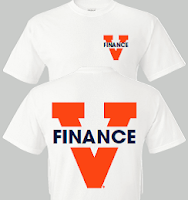 Our strategic planning committees have been meeting to come up with great ideas to implement as we move towards our vision. One awesome idea from the Employee Engagement Committee is to start a monthly “Finance T-Shirt Friday.” So, if you haven’t yet gotten your Finance T-Shirt, please email Linda Leake and let her know your shirt size.

PS: It’s mid-year.  Check Lead@ and make sure that you’ve completed your 2016 goals. Interim self-assessments should be completed by July 15th. Here are some hints on Conducting a Self-Evaluation. And check with your manager about having an interim check-in conversation to see how you are making progress on goals.

UVAFinance Vision: the valued and trusted financial partner that the University community turns to first.

June was very successful across the UVAFinance family, especially the end of the month. Managerial Reporting and the Office of Sponsored Programs released major deliverables for their stakeholders—and both initiatives promise to change how we do work at the University. 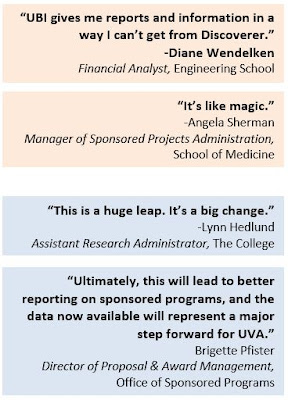 Around the same time, the Office of Sponsored Programs released the new Proposal Routing Form, a bridge to the future-state proposal development and submission functionality in ResearchUVA. The release of the “PRF” (previously known as the “Goldenrod”) is making an immediate impact, as individuals around Grounds are already using the new fillable PDF form.

The easy-to-use Proposal Routing Form is a platform for more robust and meaningful data on proposal stage activity at UVA—from both a strategic and compliance standpoint. The goal is greater operational efficiency and greater reporting capability in research administration at UVA.
No comments:

I hope all are well and enjoying summer. Hopefully you all have made plans to spend time away from work, with friends, family, or even by yourself. It is critically important that you find time to rejuvenate and connect with the external world. I have time planned to go to a conference (NACUBO in Montreal, so lovely in July!) and to the beach with my family.

UVA Final Exercises - we all had a hand in making sure that more than 6,600 students earned degrees. Thank you for your role in supporting this core mission of the institution, whether it is helping procure equipment and supplies, support faculty, train staff, award aid, collect tuition, or maintain a financially strong institution.

I wanted to call your attention to the remarks of Paul Mahoney at the Sunday ceremony. I felt that his speech was different from many, in that he provided very tangible advice for the new graduates; advice that is pertinent for everyone of us, even for those who are a bit more seasoned in our careers.

I encourage you to take a few moments to read his remarks, especially beginning on page 2 when he talks about how important it is for success in life to "take ownership, learn continuously, and think long-term." Often I will hear people wonder what they need to do to be successful, earn a promotion, and develop their careers. It takes more than, as Dean Mahoney says, to just "do what you’re told. Write the memo; create the spreadsheet; attend the meeting."  You have to own your career, your development as a leader, and even your mistakes.

UVAFinance Vision: the valued and trusted financial partner that the University community turns to first. 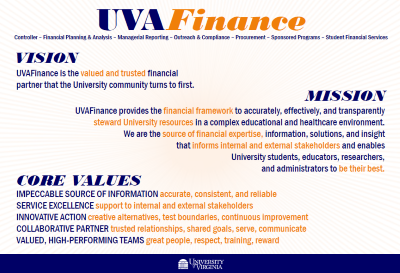 UVAFinance posters are making their way around to the various areas of the UVAFinance family. These posters display the Vision/Mission/Core Values we collectively established in early 2016. Look for them in your area in the coming days!
No comments:

Posters Around Ground: A Simple Process


Content (1 or 2 days)
What is your message? Establish any text content you want to use. If you plan to use pictures or graphics, locate high-resolution images (Google Image search allows you to filterbased on image size). The larger, the better.

Layout (1 or 2 days)
Good is in the Details. Experts use the Adobe Suite: Photoshop, Illustrator, or InDesign. But Microsoft PowerPoint is an easy and accessible tool for the rest of us Do-It-Yourself graphic designers. Just set the page dimensions to the desired poster height and width before laying out content. There are even self-guided PowerPointposter design tutorials on YouTube.

Print (2 or 3 days)
Finalized your work? Great! Save the file as a PDF, and email uvaprint@virginia.edu. Attach the PDF and provide as much detail as you can (size, mounted/not mounted, date needed, Organization, PTAO, etc). Keith Tyre and the folks at UVA Printing and Copying Services do a nice job—so give them a few days to print, mount, and deliver. 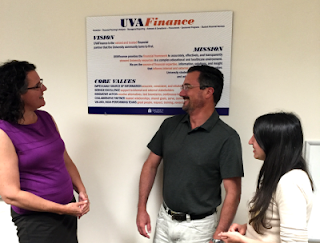 State sales tax no longer applies to meals purchased for University purposes under the following conditions:


UVA’s catering concierge, America To Go (ATG), will ensure that invoices from their caterers will not include state taxes; however, if you are using non-ATG caterers, you may need to communicate this change to the caterer. For more information, please visit http://www.procurement.virginia.edu/pagerecentpuc#section667.
No comments:

The Organizational Excellence Spotlight on Excellence peer-recognition program highlights individuals who exhibit the principles of OE in their daily work and contribute to an institutional culture of quality. 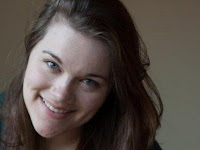 Jessica Rafter of the Managerial Reporting project was recognized with the award at the Quality CORE Network session on May 25, 2016. She was selected for exhibiting a high-level of technical competence and collaboration as she led the selection, design, and implementation of the Jira/Confluence project management toolset for MRP.

While University Business Intelligence (UBI) is in the early stages of roll-out, two groups of developers and business analysts from ITS and HR began training on Qlik Sense—the self-service analysis platform.
No comments:

A pilot group of users from Engineering, McIntire and Batten schools recently completed the first training session for Intro to UBI. Classes are being scheduled throughout the summer. Stay tuned for your Intro to UBI training invitation—scheduled by school and unit.
No comments:

Travel workbooks submitted more than 30 days after travel will now be accepted without written explanation. Expense reports are required to be submitted within 30 days from the completion of travel or of incurring the expense. Justification and approval from the employee’s supervisor’s manager is required in cases where the travel expense report submission exceeds 30 days.

State Travel & Expense Cards (formerly “P-Cards”) can now be used to pay for travel costs such as lodging! For more information and a detailed list of allowable expenses please visit: http://www.procurement.virginia.edu/pageusingthepcard

Decades ago, a study found that the typical person forgets about half of what people say as soon as they finish saying it. As workers are increasingly distracted by packed schedules and 21st-century technology, "there's no reason to think" that we've gotten any better at retaining colleagues' remarks, Daimler says.

Read the full story from the EAB Daily Briefing.
No comments: