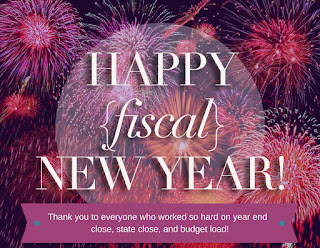 In January, we celebrate the beginning of a new calendar year, with all its unwritten possibility. There’s a similar feeling surrounding the beginning of the academic year each fall – the new school year is another fresh start. In the financial world, the real New Year is July 1, when the new fiscal year begins. The transition between old and new doesn’t involve clinking champagne and singing Auld Lang Syne, however: it’s a lot of very hard work done by a team of dedicated financial professionals.

Here’s an inside look from UVAFinance Financial Planning & Analysis and Comptroller team into the hectic transition of putting the old year to bed and getting the new one started, financially speaking.

June and July are busy months for Financial Planning & Analysis. We have multiple deadlines associated with the Board of Visitors and State, plus deadlines for closing the current fiscal year and opening the new one. One of the interesting activities that some may not be aware of is that every year, on July 1, even if the 1st falls on a Saturday or Sunday, three or four of our staff, along with support from IT, actually load the operating budgets into the Integrated System. We manually stage files to process the uploads, ensuring that installments, funding and budgeting are entered accurately on every PTAO with a year to date boundary code.

I guess you could say I’m the keeper of the cash. All of the cash accounts the departments use are reconciled each month in Oracle by Judy McDaniel and me, every month of the year. The only time we stop this ongoing process is on June 30 when Oracle shuts down. That’s when we make sure the cash object codes equal to the bank statement. We love that moment . . . it’s just beautiful when it all comes together. Our Oracle close went very smoothly this year. We had been watching our projections and making the entries we could before the system went down. On Saturday, July 1, I came in to prepare the state expenditure files, and that was a little more tricky. But basically, it is just like reconciling your bank accounts, and it allows you to get a clean start for the new year.

In my role, I make sure the eight bank accounts we have with Bank of America are reconciled for year-end closing. Every line for each statement must be reconciled or amounts won’t balance with Oracle. It gets hectic at year end, and you always have the feeling that you need to get this done, because something new is coming tomorrow. Then, we basically start the new year for each bank account, making sure all lines are reconciled and researching any problems that may occur. My biggest achievement this year was that I had all bank statements reconciled and reports run by July 5, which was a new record for us.

Anne Marie Cumiskey, Budget Analyst
I assisted units with their FY17 close out activities, and I processed budget reductions for the FY18 budget, preparing for the load into Oracle and making any final changes. I started this job last year and had heard many anecdotes about prior budget loads on July 1. I was full of anticipation, and although this year July 1 was on a Saturday, it was fun. In the middle of the morning, a coworker surprised us with coffee and donuts. We were all huddled together, watching the computer screens, and making certain the load ran smoothly. Richard Parkins from ITS was great help to us getting everything loaded (and kudos to Mike Hayton, our own technical support person, for getting me up and running in a day when my laptop died during the last week of close)!

Christine Maxwell, Senior Budget Analyst
During the year end process, I work very heavily in both current year actuals and the future budget year, which as you can imagine can become confusing…sometimes I even forgot what year it really is and I found myself signing and dating things as 2018 instead of 2017. Although we’re often working in the future budget year, at year-end time, it’s nice to really work on actuals and look at the variance with what we had planned and budgeted a year prior. This was my 2nd budget season and I think every year I’m getting better and improving. The budget process involves lots of moving pieces from all members of our team and I think the process brings us closer. The veterans on our team have lots of knowledge to share and they are willing to share it. I think our new team members are caught up to speed in record time.

James Cathro, Budget Analyst
In my role, I see an uptick in picking up loose ends and cleanup work as we try to reconcile everything for year end. I spend more time than usual in Oracle updating awards and projects and submitting ICOMs on behalf of units. I jumped in with the budget team and EA for a few hours on Saturday, July 1, as they performed the upload, and I was struck by the great attitude and enthusiasm everyone had, even on a Saturday morning. They know they’re doing the necessary work to keep the University on track and on budget.

The FY18 budget review process was challenging and exciting at the same time. This year, for the first time, I reviewed the budget submissions from the submitting unit from both a budgeting and University Financial Model (UFM) perspective. The challenge was to get the budgets balanced in UFM with zero or positive bottom line with the unit’s budget and allocated/calculated provost support, central services cost, crossing funding, and tuition dollars in the least amount of steps possible and get it ready in time for the Academic Unit’s budget review with the Provost. It was a big achievement for me to do that as accurately as possible, given all of those moving parts, for every single unit.

Year-end is different from the rest of the year because of the greater intensity and urgency. My main year-end duties include estimating the State funds that the University needs to spend down before year end, updating and maintaining the files we have to send to the State (which Imelda worked tirelessly on during the July 4 weekend), maintaining the year-end calendar, analyzing data for accuracy, and generally running around trying to put out one fire after another. Almost every day I got asked some unique questions, which meant for multiple collaborations to figure out the correct answer or solutions. The biggest achievement is knowing that as a team, we made it through. I like the fact that I can help with workloads, answer questions, and be a go-to person for those who need help, both centrally and in the departments, and I’m very appreciative of the great bunch of people I work with!