“It’s about customer service":UVAFinance unit pitches in to help Student Financial Services during the back to school rush

The start of every fall term is hectic in Student Financial Services (SFS), as new Hoos and their families arrive on Grounds with a multitude of questions about financial aid packages. Every year, just before and just after the start of classes, SFS receives thousands of questions from students and parents, in person, via email, and via phone.

For SFS, those two weeks are “all hands on deck.” Nobody takes a day off, nobody goes out to lunch, and everyone lends a hand on the phones. The pace is fast and the days are long as everyone strives to address student concerns accurately and quickly. SFS staffers admit it can be a challenging, even draining, time of the year. 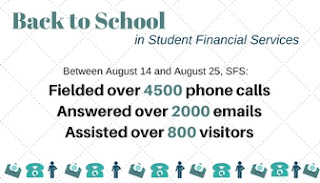 Made up of administrative professionals from all UVAFinance departments, ASG provides comprehensive and coordinated administrative services to all of UVAFinance. And they don’t wait for requests to come to them – they actively look for ways to help.

ASG member Mary Fields, who works in SFS, shared with her group that a “peak time” was coming for SFS, and her fellow team members were quick to offer their assistance.

Kimata says that ASG leader Disha Venkatesan’s offer of the group’s help was most welcome, and they quickly found places for the ASG volunteers.

“We provide lunch for all of our staffers during our three busiest days,” Kimata said. “The ASG members coordinated the delivery, set up, and cleanup of lunch for our staff members. It was a simple task, but it made such a difference because we simply didn’t have a spare pair of hands to take care of it.”

Mariah Kier, who runs the front desk in Carruthers Hall, is a member of the ASG team. In her post at Carruthers Hall’s main entrance, Kier began to see an increase in student/parent traffic, some of whom were frustrated by the fact that they had to walk around the side of the building (not through it) to get to SFS. While she was already redirecting those visitors to the SFS entrance on the other side of the building, Kier felt there might be more she could do to help.

“One of Mariah’s suggestions, based on what she had been seeing, was to create new signage around Carruthers Hall to help students and parents find their way without the wrong turns,” Kimata explained.

Kier developed and posted the new signage, which had street-view pictures and a series of progressive steps to take posted along the way, and both she and SFS could tell an immediate difference in the ease with which students found the right office.

Not only that but also, Kimata armed Kier with some frequently asked questions and answers on some very basic topics that allowed her to be even more helpful and reassuring to Carruthers Hall visitors.

ASG volunteers also helped out in the SFS lobby.

Venkatesan was one of the volunteers who assisted students both in the lobby and outside the door to SFS.

“There in the lobby, we would have students come with confusion in their eyes, asking us questions, and we could direct them to where they needed to go,” she said, adding that she and fellow volunteers also helped students and parents who were standing in line to get into the SFS entrance. ASG volunteers guided students and parents who arrived after closing time know when to come back, answered simple questions and offered reassurance.

On one rainy afternoon, Venkatesan even ran back and forth under the SFS awning to alert students and parents waiting in the foyer of the arrival of their Uber ride.

A little unconventional? Yes. But as Venkatesan says, it’s all about customer service.

“We worked as a team and it wasn’t a burden to any one of us. This is a high-stress time for students and parents,” she said. “We were happy to be able to help them and soothe them a bit.”

“ASG’s help meant all of the SFS staff could stay in their workflow, and focus on answering student and parent questions about financial aid,” said Chris Doran, SFS Communications Manager.

Kimata agrees, adding, “It was great seeing new faces from all across UVAFinance units come down to help out.”

“They might think it wasn’t a big deal, but it made a big difference,” he said. 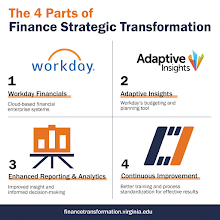