Research administrators in the School of Engineering and Applied Sciences were used to maintaining several hundred spreadsheets to keep track of faculty research projects. This method of tracking was common but separately maintained, across all schools at UVA, with data entered manually across multiple files in multiple locations. 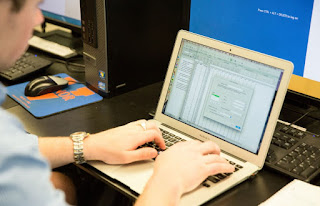 It's easy to imagine how this made it hard for researchers and research administrators to stay on the same page (both literally and figuratively).

Fortunately, a new dashboard from the UBI Engage consulting team is one step closer to bringing both research administrators and principal investigators a shared platform that brings post-award data together in a way it has never been done before.

After six months of development in partnership with the Curry school and an initial, internal pilot with Curry and SEAS, a broader pilot of the new dashboard is now being tested within Curry, SEAS, the School of Medicine, Arts & Sciences, and the Office of Sponsored Programs.

Dubbed the Research Administration Dashboard, or "RAD," the tool is being tested by team leads or "Radvocates" within the pilot areas.

The functionality is just what research administrators have hoped for. The dashboard is not only a reliable, consolidated way to see data, but also, it's a one-stop window into the financial issues and trends associated with sponsored research.

UBI Developer Andrew Yeung says the dashboard uses Qlik Sense to marry central data sets with other pieces such as student aid and the Vice President for Research's training repository, in a way that allows unprecedented clarity for researchers and research admins, especially for things like how the project's student payroll compares to available balances on grants and awards which wasn’t possible previously. All of this information is updated daily.

"There's no lag period with the app," says Yeung.

"This is the most accurate picture of your financial health that you can get right now."

Carey Reinicke, who manages grants and contracts in SEAS, said that with this functionality, she can better help researchers.

"We can now be more accurate with regard to how much money they'll need for how long, and what they will need to supplement their research," she said.

Mark Anderson, UBI reporting lead, said the project is a great example of the collaborative solutions that can be developed in the UBI platform. 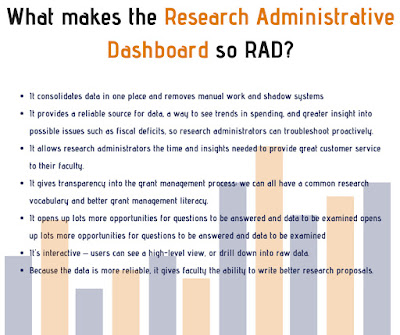 "The project was conceived to solve a specific need at the Curry School and spearheaded by Phil Paulick. When the team, which included Andrew Yeung and Johann Reinicke, saw the possibilities for a broader application, they engaged with OSP and SEAS to collaborate on a tool for the whole research administrator community. In the process, they were able to solve some long-standing challenges to get a more accurate picture of future cost commitments on grants and awards," he remarked.

According to Anderson, this pilot is another example of the UBI team's aim:  "We look forward to identifying other collaboration and partnership opportunities to build new reporting and analytics tools to support both faculty and administrators."

The current pilot is set to run through June with a broader launch in early July.

For more information about the Research Administration Dashboard, post a question on the UBICommunity, send an email to ubi@virginia.edu , or those in the pilot can reach out to their "Radvocates":

For more about the Engage consulting services from UBI, visit http://ubi.virginia.edu/ubi-engage