SEAS Commits to Early Adoption of UBI for GA/GL Reporting

Ask anyone who’s become an active user of UBI, the new enterprise reporting environment, about their impressions of the tool and you’re likely to hear a few consistent refrains:  it’s so easy to use, the reports run so quickly, and I wish I could use it for everything, already!

Usage data supports the overall enthusiasm for UBI.  To date, 864 users have been trained; of this group, 42% are considered “active” users.  With GA and GL reporting functions of Discoverer set to end by August 2017, this is a certainly a big step in the right direction. 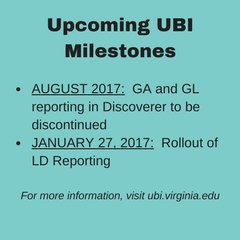 Institution-wide, reliance on Discoverer finance reports is decreasing, but a gap exists between those who have the ability to use UBI and those who are actually using it on a regular basis.   To put it plainly:  for many of us, we tend to opt for the more familiar process, even if something better is available.

In order to overcome this natural and understandable inertia, some schools within UVA are opting to push for earlier UBI adoption goals.  The Frank Batten School and the School of Engineering and Applied Sciences (SEAS) are two examples.  Both schools have set a goal of February 28, a full six months ahead of the official deadline, to cease usage of Discoverer for GA/GL reports.

Robert Bremer, Associate Dean for Management and Finance in SEAS, is a champion of his school’s goal, which he calls “worthwhile” and “a significant step forward.”

Since December, Bremer and the team within SEAS have been working hard toward this goal.  Diane Wendelken and Mary Smith, SEAS UBI super users, have been coordinating with UBI training developers to offer additional training sessions to UBI users within SEAS, and generally cheering on and assisting their colleagues with the transition.

Wende Hope, Director of Communications in the Department of Mechanical and Aerospace Engineering, has taken part in that additional training and has found it immediately helpful, given her role in communicating the research done at SEAS.
“SEAS has half the research dollars of all the schools,” she says.

“We need to do research reporting so the primary investigators know where they stand.  With our commitment to growth, knowing where the research dollars are is key.”

The sessions offered at SEAS by UBI users were very helpful to Hope, helping her gain proficiency in the system.

“I’ve been to a lot of trainings on a lot of subjects, but this training was exceptionally well-designed,” she says. “The instructors clearly demonstrated how the tool would be helpful to me.  I can tell the time and thought and design and sincerity and energy that have gone into this.”

Hope and others at SEAS echo common feedback from many who’ve been trained in UBI:  the support system surrounding the program is amazing.

From an online community where users can ask questions and interact, to specialists within the schools and units, to regularly-scheduled and meaningful training and workshops, the team in Managerial Reporting has made the transition to UBI as pain-free as possible.

For schools and units that seek to increase UBI adoption in their area, MRP is standing by to help.  Contact the UBI team at ubi@virginia.edu to get started!

The reward for early abandonment of Discoverer GA/GL reports across SEAS is, officially, a party for the entire group of users, but, if you ask Wende Hope, or anyone who’s already a user of UBI, the reward is the program itself.

Note:  A workgroup is being formed within UVAFinance to encourage early adoption of UBI.  If you have ideas on how to decrease Discoverer usage within UVAFinance, contact Kelly Hochstetler. 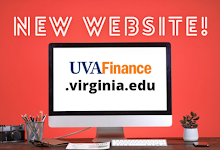