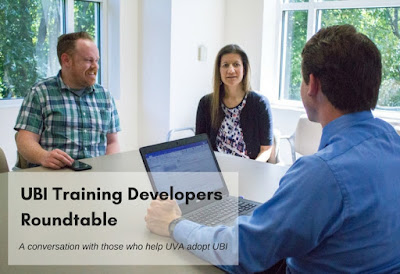 With the growing transition towards full adoption of the UBI reporting tool across the University, the number of UBI users surpassed those still using Discoverer. And the trend doesn’t appear to be slowing down as the days get closer to the planned Discoverer sunset for SIS reporting in Discoverer. For a “behind the scenes” perspective of those who are helping users with UBI adoption, we sat down and spoke with the team of UBI Training Developers, Matt Douglas, Linda Leshowitz, and Christopher Birkl -whose roles are to guide users into leveraging UBI for data reporting.


Talk about your role as UBI Training Developers and how you promote UBI to the University.

MATT DOUGLAS
Our role as Training Developers is to foster adoption through a forward-facing role, so getting people comfortable with the tool enough to where they’re able to able to take off and use it in their day-to-day experience.

LINDA LESHOWITZ
Absolutely, I would agree. Helping them feel comfortable with the new tool, encouraging them to use it, and pointing out how it can have advantages for them – because it’s faster and can ease the path of getting the data. Sometimes when you first look at UBI it is quite a bit different from Discoverer, so you may not recognize that at first. In our role, we can point those things out, whether it be in the classroom, when we answer questions on the Community, or in Office Hours.

CHRISTOPHER BIRKL
As trainers, the initial thought is, “Okay, they teach the classes, they do the intro training, the advanced training,” but we play a huge support role, as well.

LESHOWITZ
That’s true, because we wear so many hats. Even just in email and phone communication. I like that part, because you develop some personal relationships with some of the users, and that’s a nice byproduct of training.

LESHOWITZ
Right…that helps them do their job better, more efficiently.

What are the steps you usually go through when you’re working towards a new UBI release?

BIRKL
First of all, we have to understand what’s coming. We meet with the Reporting team, they give us an outline of what modules are coming, or planned to come –

DOUGLAS
That’s usually a lot of talking back and forth on not just about the modules, but “Why would somebody use this?”

BIRKL
We have several meetings. The initial meeting might be to show us a preview of what’s coming, and then they’ll do a follow-up meeting where we actually go through the modules. Like Matt said, we’ll discuss why users would use these modules. Obviously, the modules are still in development at that point.

LESHOWITZ
Then usually, we will get together as a team and then decide who’s going to do what. We’ll make assignments, depending on what people are doing – we usually do that very smoothly. We update the mapping tool, which requires getting input from the reporting team, and checking Discoverer to see what the crosswalk is.

DOUGLAS
From the time that they’re planning their release to the point where we can actually start working on creating content for the release, there’s a huge space there. Once we learn the module(s) and we’re tracking its development, then everything is pretty quiet up until the point where the module development is frozen. Then we know when everything in there is permanent and we can begin to build resources off the module. Then things get busy.

LESHOWITZ
I often try to have a “skeleton” beforehand, especially if there’s a really packed week, the week of development. Like Matt was saying, it’s a pretty short timeframe that we have to turn around our guides and get up to speed. You have to be really careful because there can be changes right up to before UBI is released.

BIRKL
These are our Quick Reference Guides, mainly. That iterative approach that we take - we’re working on creating content all the way up until the day of the release. As Matt said, once the module content is set in stone, it gets busy. That’s why we target Wednesday after a module release – three to four days after a module is released – to have our materials out, available and ready to go. That means they’re accurate and timely, too.

LESHOWITZ
We post those [Quick Reference Guides] on the UBI Community. We often get access to the modules in the Quality Assurance (QA) environment, but again, there can be changes. We have to be careful how much we develop beforehand. You have to be really flexible. Sometimes there will be something planned, and you’re assigned to it, and a few days later there’s a very legitimate reason for it to be pulled from the release and moved to the next release. So you just roll with it.

With eLearning that will replace in-person training, what are your thoughts on that development – and what is some of the feedback you’ve received?

BIRKL
It’s exciting. We’ve made a lot of improvements with the SIS eLearning version and have applied those to the Finance version as well.

LESHOWITZ
What I really like about eLearning is you can recommend the courses as a refresher class. So even if you’ve taken an in-person Intro class, you now have the opportunity to learn self-paced, when you have the time and to review the topics you need to review – you decide. I like being able to offer that option to users. I think there are a lot of folks that like being able to do that at their own pace.

DOUGLAS
From a workforce perspective, it’s better in the long run for management to be able to say, “Hey, do this when you can, take a half-hour each day.” This makes it a lot easier to manage your workforce.

LESHOWITZ
Especially with new people coming onboard, we don’t want them to have to wait for a face-to-face class. Now if you have one or two new people in your department, who can just take it immediately.

DOUGLAS
I think one of the things that surprises most people is how far eLearning has come and the quality it presents. At least that’s the feedback I’ve gotten so far.

What do you find most rewarding in your role of helping promote UBI throughout the University?

DOUGLAS
I’d say the most rewarding part of being able to train UBI is when I see a user actually gets it. When you see that light go off on their head and they realize, “Oh, if I can do this…” then they start taking it further. “I can go X, Y, and Z, too, right?” And I love being able to see users thinking critically about it and being self-motivated to take it from here. I enjoy that part.

LESHOWITZ
I like it when they get excited about UBI. Like what you were saying, Matt – when they get excited about what they can do with UBI, and they’re ready to take that leap into a new reporting system. What’s particularly rewarding - whether it’s a class, Office Hours or whatever it might be - and someone sends a thank you email. It could be thanking you for your help, helping them resolve something [in UBI], or just that they’re excited about UBI and thanking you for the class instruction. That’s very rewarding and makes you feel good about what you’re doing.

Get more information in the UBI Community.

Additionally, it is suggested but not required, that you begin the ESHARP access prior to attending training. View the Get Started page to learn more.