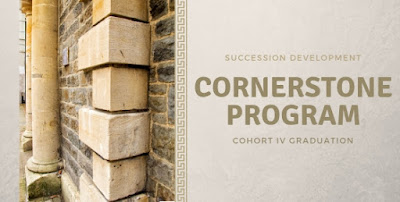 On September 27, the Fourth Cohort of the succession development Cornerstone Program graduated and presented their projects.

Representing UVAFinance in that Cohort was Mark Anderson, Business Intelligence Lead. During the past year, Anderson and the 29 other cohort participants have received customized leadership development, including a 360 assessment and coaching, and mentoring from senior leaders.

Anderson felt the program had many assets for him as a participant, but chief among them were the networking opportunities and the mentoring he received.

Read more after the jump!


"Most of the people in this program were in roles I wouldn't normally interact with, so I got a lot of perspective. I also enjoyed my mentoring relationship with Bill Ashby, the senior associate Dean for Administration at Batten," he said.

The networking with peers in the program also led to a collaboration between the UBI team and the Office of Student Affairs, which is ongoing.

Participants in the program form teams to work on projects submitted by University senior leadership.  The projects in this cohort ranged from serving undergraduate military veterans to new employee onboarding and orientation.

Anderson's project team evaluated previous Cornerstone projects in order to make recommendations on how to lead successful change initiatives at UVA.  One of the other Cornerstone projects this year was the establishment of an Analytics Community of Practice (ACP). Hosted within the Community Hub and with monthly in-person meetings, the group has so far brought 60 individuals from different schools and units together with a common goal of sharing current knowledge, and best practices.

The ACP has already been key in solving some issues common to those who work in business intelligence at UVA: in the very first meeting, one member shared a program he had written to clean up course evaluation data out of Collab, a painful chore shared by others in the group.

Without access to a network of peers doing the same kind of work, Anderson pointed out, that solution would not have been as easy to share.

"It's great to have a forum where you can ask questions and see what others are working on outside of your own silo," he said.

Cohorts for the succession development Cornerstone program are selected annually by their senior leadership from the Academic Division, the Health System, and University Physicians Group.