Before the longest government shutdown in American history ended on January 25 this year, many furloughed government employees had experienced financial stress. Unsurprisingly, some of the affected households were families with students at UVA, who were facing tuition bills but not receiving a paycheck.

Over the course of the shutdown, a dozen or so families reached out to Student Financial Services with concerns about payments and worries about the impact of the potential length of the shutdown. On an individual basis, SFS responded quickly, with a situationally-appropriate version of the same message: don't worry; we'll work with you. 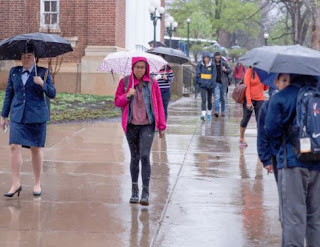 "Our contact center staff reassured the affected families that we would be glad to work with them," says Steve Kimata, Assistant Vice President for Student Financial Services.

According to Kimata, working with families and students affected by the furlough is a silver lining in a tough situation, but it's also pretty standard stuff for SFS.

Many past instances of disaster have resulted in the SFS team employing a student-focused philosophy while at the same time properly stewarding UVA's financial resources and working hand in hand with UVA leadership and other departments, such as the Office of the Dean of Students.

Kimata can remember working with partner offices across Grounds to extend resources and support to students and families affected by a succession of past hurricanes: Harvey, Sandy, Maria and Iris. In 2005, he recounts, after Hurricane Katrina, UVA welcomed over 100 Virginia students from Tulane who took classes at UVA free of charge for a semester.

"Our first concern in response to Katrina," Kimata says, "was our students from New Orleans who were here at UVA, and right on the heels of that, we were concerned with students from Virginia who were at Tulane." He notes that then-president John Casteen's response to Katrina was considered a bit atypical at the time, but UVA leadership felt it was the right thing to do.

Of course, this sort of response takes coordination of efforts across UVA, but as SFS's Sarah Doran points out, by having student accounts and financial aid located in the same department, SFS is able to avoid a certain amount of passing students back and forth when they have special cases. Because SFS is embedded within central finance, she says, the team has the connections and institutional knowledge they need to make good decisions in each case.

And, Doran says, the team has the trust of the VP of Finance to bring fresh solutions to discussions with their partner offices.